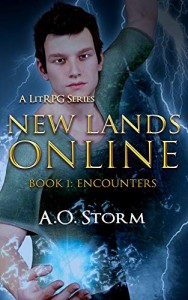 Drive to the snow resort. Teach snowboarding. Rinse and repeat.

Kano was enjoying life, though broke, as a snowboarding instructor in Lake Tahoe until an accident happened. Due to a hospital mix up his life takes a novel turn and he ends up inside New Lands Online, as its first ever digital human.

He never signed up to be the main character in an ultra realistic virtual reality game where bodily functions are as real as can be and has to learn new skills to survive. From the arena where Kano has to fight to survive to the Three Rivers, a small village where Kano experiences multiple adventures, to Boon Peak, where Kano gets a taste of his old life, Encounters has entertaining action, adventure & humor from beginning to end. The progression from newbie in the game world to druid with magic powers and spells is a thrill ride you’re sure to enjoy.

Will Kano level up inside New Lands Online, or will the game world get the best of him for the 978th time? Find out in book one: Encounters and experience the epic adventure!