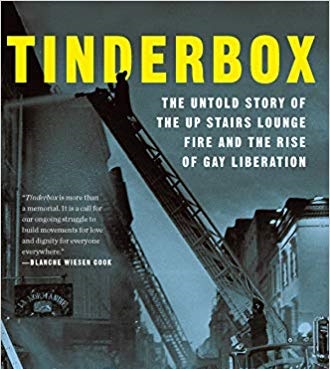 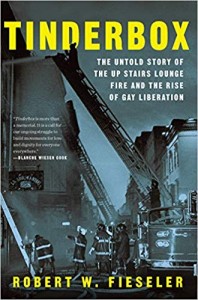 Tinderbox: The Untold Story of the Up Stairs Lounge Fire and the Rise of Gay Liberation – United States History, Non-Fiction, LGBTQ

Buried for decades, the Up Stairs Lounge tragedy has only recently emerged as a catalyzing event of the gay liberation movement. In revelatory detail, Robert W. Fieseler chronicles the tragic event that claimed the lives of thirty-one men and one woman on June 24, 1973, at a New Orleans bar, the largest mass murder of gays until 2016. Relying on unprecedented access to survivors and archives, Fieseler creates an indelible portrait of a closeted, blue- collar gay world that flourished before an arsonist ignited an inferno that destroyed an entire community. The aftermath was no less traumatic―families ashamed to claim loved ones, the Catholic Church refusing proper burial rights, the city impervious to the survivors’ needs―revealing a world of toxic prejudice that thrived well past Stonewall. Yet the impassioned activism that followed proved essential to the emergence of a fledgling gay movement. Tinderbox restores honor to a forgotten generation of civil-rights martyrs.

“Journalist Robert W. Fieseler salvages [an] unsettling moment in American history from the edge of forgetfulness in a remarkable, potent remembrance…. It’s indescribably moving to learn in a final author’s note that survivors hesitant to speak on the record for Tinderbox came forward with urgency after the Pulse massacre. Their testimonies, Fieseler’s rigorous research and his amiable prose make this a vital, inspiring volume in the annals of gay history.”
– Dave Wheeler, Shelf Awareness

“In his impressive, meticulously reported debut as a nonfiction author, Robert Fieseler vividly re-creates the world that produced a galvanizing tragedy, a fire at a New Orleans bar in the summer of 1973 that took thirty-two lives. In reminding us of the furtiveness of gay life even in a tolerant city, and of the official culture’s hostility to it, Tinderbox is riveting and unforgettable.”
– Nicholas Lemann, author of The Promised Land

“Fieseler handles contradictions with finesse, parsing the closet’s long shadow over gay life in New Orleans, one reason the [Up Stairs Lounge] tragedy did not catalyze the kind of outrage and activism that followed the Stonewall rebellion…. The book is loving, sensitive, and diligent.”
– Parul Sehgal, New York Times