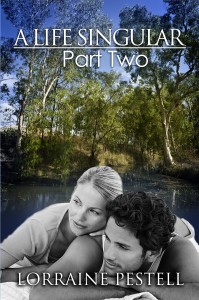 The second in a six-part contemporary fiction serial, “A Life Singular – Part Two” tells the story of a successful celebrity writing his autobiography after the tragic loss of his wife. In essence a love story, the serial’s themes are triumph over adversity and the endless pursuit of love and wisdom.

Writing an autobiography on behalf of someone else presented Jeff with an interesting dilemma. Did he make assumptions about what Lynn would have included, or should he restrict her contribution to direct quotes from her letters and diaries? He had their kids to protect, and her parents…

As he worked through the huge amount of material available in the press about their life as it had taken shape, interlacing it with highly personal stories, the widower crafted chapter after chapter of memories, both happy and heartbreaking. If this was to be a true account of their partnership, he owed it to the memory of his beautiful best friend to cover so much more than what was already on public record.

When it came to adding his own reminiscences of those early months, about meeting someone he already knew intimately, Jeff had no difficulty in recalling every single, vivid moment. Entire conversations came back to him, sometimes word for word, rushing through his fingers and into the computer.

Photographs prompted him too, as did the treasured possessions that surrounded him, like the old leather jacket he had received on his twentieth birthday. Lynn had left him shortly after that, just like she had left him now. The pull of being together again was unrelenting, but Jeff hung on to the dream that their life singular would one day resume. Once their story had been told.