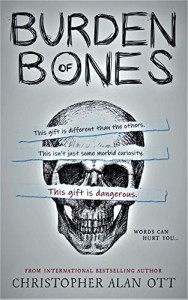 It was a gift. A novelty. A trinket from human bone.

For struggling horror writer Harvey Griffin, it might be just what he needs to revive a floundering writing career. But the pen is more than it appears to be. It opens doorways. And once those doors are opened, ghosts both literal and figurative come pouring through.

Among them is girl dead for more than half a century. A girl begging for Harvey’s help to put to rest undead spirits. But in aiding her, he may lose a piece of himself.

Hidden within Harvey’s own writing is a code scrawled by someone or something from beyond the grave. A secret is buried in the small town of Elwha Washington. There, among the dense foliage of the rainforest he will discover the unimaginable truth behind the pen, the town, and himself.

But among these truths lies a most disturbing revelation…