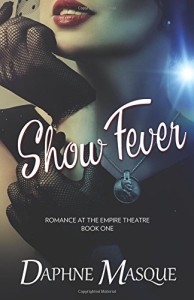 Show Fever: Romance at the Empire Theatre, Book I – Romance

Clarissa needs a new life. She’s been nursing a broken heart for too long. She finally accepted that she would never experience amazing love but she could have a fantastic career. Determined to fulfill her long lost dream of becoming a great actress she auditions for The Empire Players. This time nothing could stand in her way. Alexander needs to hurry and get back to New York; his social calendar was splitting at the seams. All he had to do in Grover’s Corners was produce “The Philadelphia Story”. He didn’t need any entanglements, obstacles or Femme Fatale actresses bogging him down. Who would have expected they would meet the unexpected, when least expected? Sparks fly between these two headstrong artists. You’re invited to a front row seat . . . back stage. 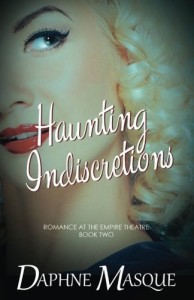 Will the job Sammi takes to stabilize her life cost her the only family she’s ever known? Sammi wants the promotion to technical director in the worst way. As a single mom, she needs to provide a stable life for herself and four-year-old Harry, her holster-wearing, curly haired, rag-a-muffin son. She’s worked in touring theatre for years, knows it as well as she knows her own mind. Directing “And Then There Were None” seems like a perfect opportunity to fulfill her career goals. Easy peasy. That is, until she encounters a cold case from a murder twenty-eight years ago, along with a community riddled by ghost stories, a crumbling turn-of-the-century theatre, precious little funding, and a near-death experience. But what drives her really crazy are all the unexplained memories in a town she’s never even visited. Instead of grabbing for the brass ring, she’s barely holding on for dear life. The pièce de résistance is Marcus, the FBI agent turned reporter with a daredevil smile and laid-back swagger. Handsome as a swashbuckler, charming as a pirate, and smarter about investigating cold cases than anyone in town, she’s forced to work with him. But is he really out to help her or gather material for the next great American novel. He makes no apologies for wanting to build a career as a reputable author, but would he really use Sammi’s calamity as a stepping stone for his own career? To solve the mystery, she compromises her ethics and makes a deal with the honey devil. Marcus will lead the cold-case investigation, and in return, she promises he can write about The Empire Theatre ghosts. Only she doesn’t know that the story he wants to write is her own secret past. How can something that happened so long ago, in a place she’s never been to, hold the answer to her future? 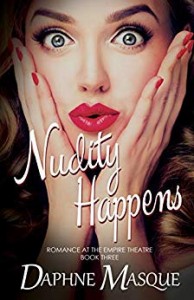 It was a dream come true. After all these years of hoping and believing, Faith Burke finally had a career working at a professional theatre company. Well, okay, maybe career is overstating it.

Truth is, The Empire Players, weren’t exactly professional. They would be, soon, well, probably in the next couple of years.

Plus, Managing Director was a pretty big title for her, a constant beacon in a creative storm. That might be embroidering the truth a little; this was the last show of the season and all the hard work had been done.

Still, she had to manage the director and inspire his artistic courage to lead a band of thespians into an award-winning season. Okay, maybe not courage exactly, more like pig-headed stubborn.

Which defined John Cutler to the bone. He was the director of “Hair, The Musical,” and had a daredevil smile that melted her heart. He was also the man who left her twenty-eight years ago when she needed him most. Now, he was back and had aged like fine wine, looking better than she could have ever imagined.

Never mind him. She had a job to do – to make sure the show opened without a hitch. Easy Peasy. That is until John Cutler played the artistic integrity card and insisted on nudity in the production. Seriously?

Next thing she knew the show was spiraling rapidly into madness, the vandals struck, the zany criminals plotted her demise, and the picketing by the Honorable League threatened to cancel the show.

The only one who could help Faith was John, the man she couldn’t trust.