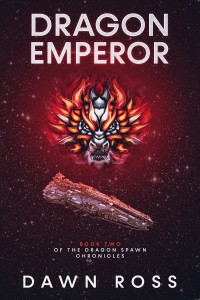 The mission is underway. The Dragon Emperor leads a battle in space while his warriors swarm the surface of a planet where a device that can be converted into a powerful weapon awaits. His plan to regain the supremacy lost by his father is progressing perfectly. One thing threatens it all—his ten-year-old son.

Though young, Jori promises to be the greatest Dragon Warrior in history. His fighting skills are already better than those of his older brother. He is profoundly intelligent, and he has other skills that even the emperor himself doesn’t have. His only weakness is his sentiment. As the emperor’s dream of dominance comes closer to fruition, Jori’s struggle between morality and familial duty threatens the course of many lives, including his own.