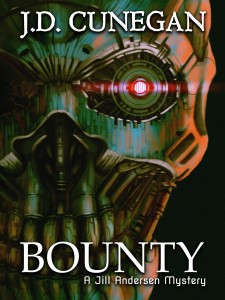 Jill Andersen is one of Baltimore’s best and brightest detectives, but she harbors a dark secret — a secret that threatens to come out when the body of Dr. Trent Roberts is pulled out of the Chesapeake Bay. Dr. Roberts’ connection to Jill reveals a past that involves a tour in Iraq, a secretive cybernetic experiment, and a conspiracy that involves a native son. Can Jill solve the case while still keeping her secret? Will her partners at the Seventh Precinct find out what she’s so desperate to hide? What was Dr. Roberts looking into that led to his murder? And perhaps the biggest question of all… Who is Bounty? 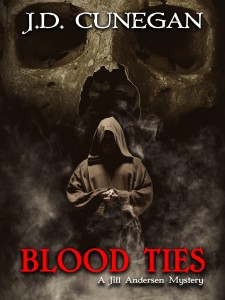 For as long as Jill Andersen could remember, her father was a hero.

But heroes don’t commit murder, do they? The state of Maryland said Paul Andersen did just that, three times over, and was set to execute him for it. But Jill and the rest of her colleagues at the Baltimore Police Department come across the murder of a law student that leaves her hopeful that she can clear her father’s name.

While Jill and her colleagues work against the clock to clear her father’s name, new players emerge, hinting to a deeper, darker conspiracy than what was previously known. An enigmatic faction known as The Order reveals itself, and the mystery surrounding Paul’s alleged duplicity leaves more questions than answers.

Along the way, Jill must not only face the possibility that her father was not who she thought he was, but she must also face the prospect of her secret being revealed. The stakes are higher than ever in Blood Ties, the intense follow-up to J.D. Cunegan’s debut mystery Bounty.

Can Jill save her father before it’s too late? Will she even want to?