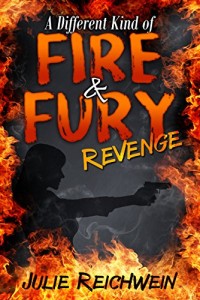 Detective Michelle Velasquez kicks ass with the Santa Fe Police Department, and she’ll need all her moxie May 2013 as she’s assigned two cases which may be related. She’s assigned a vicious rape case of Maria Acevedo, an intern with the Jones Financial Group, as she gets a call from an old friend, Richard Stanberry III. He’s intent on re-connecting, but she’s suspicious of his motives for good reason.

As she digs into Maria Acevedo’s rape case, she’s assigned a thirty-year-old murder case of her former friend, Susie Murphy, who happened to be Richard Stanberry III’s girlfriend at the time of her murder. If Detective Velasquez wants to solve both cases, she’s going to have to put her life on the line to uncover some dark secrets that some prefer to stay buried.

“A sordid rape and a thirty-year-old cold case set the scene for what proves to be a classy and edgy debut for Reichwein and one that’s sure to get her noticed by avid readers of the genre. Crime fiction is by necessity plot driven and writing a good police procedural, thriller or suspense novel isn’t easy. New authors often find themselves juggling so many plot threads that they become irrevocably tangled but Reichwein weaves hers with genuine flair and A Different Kind Of Fire And Fury; Revenge is one of those novels where you’ll want to savour the fine detail. A sure sign of a bestseller the forward momentum is relentless as Detective Michelle Velasquez finds herself drawn into a web of lies and misdirection and whilst Reichwein may be new to the genre she’s clearly adept at revealing her characters’ emotions. Doing so through well-conceived backstories and a word or two of nicely nuanced dialogue readers who like James Patterson will find this certainly hits the mark. With her sights clearly set on the genre’s bestsellers, Reichwein has come out fighting with a series that has huge potential and
A Different Kind Of Fire And Fury; Revenge is highly recommended.” – Book Viral

“The Bottom Line: A timely, high-octane revenge thriller for the #metoo era.

Julie Reichwein’s new thriller is a raw revenge fantasy where fiction meets the real-world fight to stop sexual assault. The story begins as Detective Michelle Velasquez is assigned to two cases, the first of which is the rape of financial company intern Maria Acevedo. The second is a 30-year-old murder case involving her former friend, Susie Murphy.

The connective tissue between the two cases comes in the form of a man, arrogant extreme skier Richard Stanberry III. Reichwein crafts the narrative from alternating points of view, including Velasquez, Acevedo, Stanberry and others. The structure works well enough, although those expecting much mystery or subtlety should look elsewhere. Like the Uma Thurman revenge thriller Kill Bill, Reichwein’s narrative is full-bore from the get-go, and is intended to invoke sympathy and revulsion from readers in equal measure. In this regard, it succeeds. Only a sociopath could come away from Reichwein’s novel without being somehow moved by the heartfelt grief, shame, compassion and violence demonstrated throughout.

References to the #metoo movement – including specific references to Twitter – appear throughout. Those looking for a tangible connection to Fire & Fury, the non-fiction expose on the Trump white house, won’t find one. Given the explosive content, however, one can guess that it may be a reference to the president’s warning to North Korea on Aug. 8, 2017 that he would unleash “fire, fury and frankly power, the likes of which this world has never seen before.” Whether intentional or not, the title is an apt description for the raw emotion on display in this most unusual and effective novel.” – BestThrillers.com