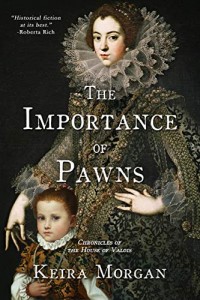 The Importance of Pawns: Chronicles of the House of Valois (Historical Fiction)

“Love, revenge, deceit, valour, struggle and bravery. These are the keystones of Keira Morgan’s fascinating new novel, The Importance of Pawns. Historical fiction at its best.”

The sixteenth century French court dazzles on the surface. But beneath its glitter, danger lurks for those caught up in its flux. Based on actual historical events and characters, this riveting story will keep you turning the pages until the end. It is also a timeless tale of envy, power and intrigue pitted against loyalty and the strength of women’s friendships.

The queen lies dying; the king’s health is in decline. Their two daughters, Claude and young Renée, are heiresses to the rich duchy of Brittany. Countess Louise d’Angoulême, recently named guardian to both girls, is mother to the next king. For years she has envied the dying Queen Anne, the girls’ mother. She schemes to marry wealthy Claude to her son. Her unexpected guardianship presents a golden opportunity, but only if she can remove their protectress Baronne Michelle, who loves the princesses and safeguards their interests.

As political tensions rise, the futures of Princess Renée and Baronne hang in the balance, threatened by Countess Louise’s plots.
Will timid Claude untangle the treacherous intrigues Countess Louise is weaving? Will Baronne Michelle and Claude outflank the wily countess to protect young Princess Renée? And can Claude find the courage to defend those she loves?