Posted Jun 15 2020 by TheButler in Interviews with 0 Comments 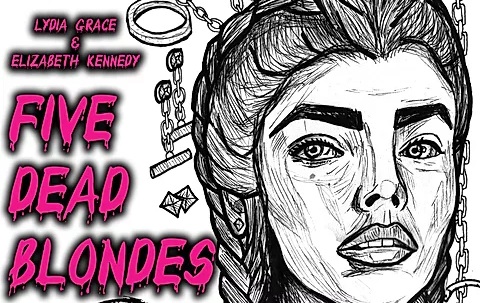 IBB: Can you tell us a little about yourselves?

We met each other at university in Manchester, UK when studying for our undergrad degrees in English and Creative Writing and have been best friends ever since. We have both always had a love of literature and film, it’s how we bonded in the first place. Since then, Lydia has gone on to pursue a career in healthcare and Elizabeth has completed a publishing master’s degree and set up Otranto House. We still reside in Manchester.

IBB: So, what can you tell us about Five Dead Blondes?

Five Dead Blondes in a young adult crime fiction. It’s split mainly between the perspectives of Cash Stone and Daisy Moore, who are 17-year-old students from a small fictional town set in the Lake District area of the UK. Daisy is reeling from a sexual assault that happened to her at a house party, and her friends aren’t being supportive. They’d rather pretend it didn’t happen as it was a guy in their group who committed the assault, and they find that a hard reality to deal with. Cash is friends with a different crowd who are more low-key at school. He lives with his mother and baby sister, but his father left when he was a small child, his sister has a different dad who has also left the picture. His mother struggles with mental health issues and this has led to Cash feeling as though he has had to take on more responsibility at home, which at times he is resentful for. While they are struggling with their individual problems, a serial killer starts to stalk their hometown and as the body count rises, Cash and Daisy forge an unlikely friendship, eventually deciding to start an investigation of their own when the police don’t seem to be making any progress.

IBB: Where did the idea for the book come from?

Originally, Otranto House had been developing a teen crime novel with another author, but due to conflicting schedules they had to drop out. As we have both always loved true crime and thriller genres, and had previously discussed working on something together, we decided to take the initial project in a new direction and move forward as the authors ourselves, making the story our own.

IBB: Was everything planned out in detail before you started writing?

Yes, we developed the story over a few months and were pretty much working on nothing else. We allocated characters to one another to write (Lydia took Cash, Elizabeth took Daisy), plotted out all the chapters and then set out working on the first drafts.

IBB: How easy did you find it to balance the horror elements with writing for a young adult audience?

Pretty easy to be honest. As we have always been fans of horror and crime since we were that age, we felt pretty confident in what we were writing. We didn’t want to sugar-coat the themes and more horrific aspects of the murders etc, but we also didn’t want to be gratuitous and we think we have found a reasonable balance. Our main priority was making the characters feel real, and so we based them a lot on how we were as teenagers and tried to put ourselves in their position. 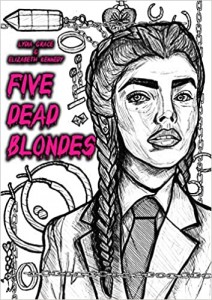 IBB: Without giving too much away, would you ever re-visit any of the characters for future works?

No, we planned this as a stand-alone novel and we think the story has been told. We wouldn’t want to spoil things by trying to make it into something it isn’t with a sequel.

IBB: How did your joint-writing process work? Did you come across any particular challenges?

As mentioned before, we split the characters between the two of us and that was established quite early on in the development stages. We kept in close contact and met on a regular basis during the entire experience, for us it felt rather seamless and we feel we worked well together as a writing team.

IBB: Who would you say is your ideal reader?

Someone who enjoys ‘teen scream’ type stories would probably enjoy Five Dead Blondes, that was the demographic we had in mind when coming up with the idea. Although, there are other issues explored in this story such as trauma, familial pressures, feeling alienated from your peers and coping with mental health, so people who enjoy reading about those topics might also find Five Dead Blondes interesting. Primarily though, we think probably 16+ horror/crime fans would enjoy this book.

IBB: What was the hardest part about the whole process, from ideas to publishing?

We did have to work to quite tight deadlines and that was a challenge as we had to work full time alongside this project. I think trying to make sure the writing quality was the best it could be at all times, while having a close deadline in mind could be quite stressful. On the other hand, it was also good to have an immediate target to work towards so there were benefits to that.

IBB: What do you both want both achieve most from the book?

Naturally we would like to make some sales from this book, but the most important thing for us is sharing it with readers and that people enjoy the story and are entertained by it. Or even taking something more profound away from it if it happens to affect them that way. Although, we did write this as a bit of a fun horror/crime book rather than trying to make a statement of any kind.

IBB: Do you have a favourite review or piece of feedback you have received from a reader?

The most common feedback we have received that has been particularly positive is regarding the characters themselves. Several readers have told us that they found them very realistic and could relate to them a lot, which is great as that was very important to us when starting this project. We wanted to make the characters as engaging and realistic as possible.

LG: Nowhere in particular, just somewhere I am not disturbed.
EK: I probably did the majority of writing for this book in the garden as it was during the spring/summer months we worked on this. However, I’m the same really – at a desk or table somewhere quiet where I can focus is the ideal.

LG: Coffee!
EK: I need to be alone; I hate writing when someone is in the same room or hovering around – it’s so distracting! Occasionally a glass of wine and some atmospheric music can help, too!

IBB: What books have influenced you most?

For this project we probably took more inspiration from classic teen horror/slasher movies rather than books as that was the genre and style that had inspired us. But we both read a variation of different genres and authors that have inspired us or perhaps even have influenced us without us realizing it, but in terms of this project, there isn’t any one specific writer, book, film or TV show.

IBB: Is there something specific either of you do to improve your writing?

LG: Getting feedback and a fresh pair of eyes helps a lot, we both shared our work with each other to read over, plus our editor.
EK: I agree, feedback is the main thing that helps me to improve my writing. I find it’s always good to keep questioning things to a certain extent as well to make sure that you’re keeping things grounded and the characters and situation feeling as real as possible.

LG: Write something you want to read, not what you think others want to. If you’re not interested in your own story then how can you expect other people to be?
EK: Keep writing and practice your craft. It’s really easy to let time pass by but you need to keep learning and honing your skills. Also, don’t take criticism too personally. It can be hard to hear critiques, but try to remember it isn’t anything personal – your editor is trying to help, and reviewers are sharing their opinions – that’s their job.

IBB: What does your writing future hold for you both?

EK: I do have some ideas floating around, but I need to allocate some time to develop them and start writing. Hopefully I can have another book completed in the next couple of years.
LG: I’d be interested in writing some short stories in future as they feel like a bit of a different challenge than a longer novel.

IBB: How did you set about the task of creating your fantastic cover art?

Elizabeth used to work with a very talented young artist called Simon Davenport and asked if he was interested in doing it for us. We commissioned him for the job and he totally nailed it.

IBB: How often do you both read? What genre?

Five Dead Blondes can be purchased at: Otranto House