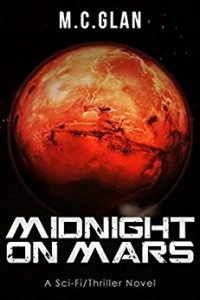 Kari flees to the Martian colony, Habitat Horizon, to escape the end of the world on Earth. But she is devastated to find out that her ex-fiance’s, scientist Neil Blackwell, cloning project went wrong and he created killers that are responsible for the death of most of the colonists.

However, she finds that it’s the least of her worries; mercenaries are trying to overtake the colony, and Kari sees someone – or something – following her.
Midnight on Mars is a science fiction/action/thriller, set in the year 2060, when all hope for the survival of the human race rests on a Martian colony. Kari is a spiritualist, having worked for a non-profit organization on Earth that studies energies, while Neil is a scientist, working for the International Coalition of Space Expedition as a bio-engineer. When they find each other on the colony, they must put aside their differences and work together to find not only other survivors, but a way to save humanity itself.