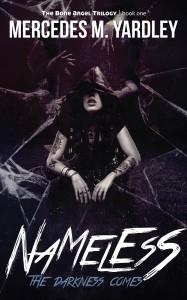 LUNA MASTERSON SEES DEMONS. She has been dealing with the demonic all her life, so when her brother gets tangled up with a demon named Sparkles, ‘Luna the Lunatic’ rolls in on her motorcycle to save the day.

Armed with the ability to harm demons, her scathing sarcasm, and a hefty chip on her shoulder, Luna gathers the most unusual of allies, teaming up with a green-eyed heroin addict and a snarky demon ‘of some import.’

After all, outcasts of a feather should stick together…even until the end.

This is the volume one in The Bone Angel Trilogy by Mercedes M. Yardley, author of the award-winning novella, Apocalyptic Montessa and Nuclear Lulu: A Tale of Atomic Love.

Her mama always said she was special.

His daddy called him a demon.

But even monsters can fall in love.

Montessa Tovar is walking home alone when she is abducted by Lu, a serial killer with unusual talents and a grudge against the world. But in time, the victim becomes the executioner as ‘Apocalyptic’ Montessa and her doomed lover, ‘Nuclear’ Lulu, crisscross the country in a bloody firestorm of revenge.

There is a place where sorrows pile up like snow and rest in your hair like cherry blossoms. Boys have wings, monsters fall in love, women fade into nothingness, and the bones of small children snap like twigs. Darkness will surely devour you–but it will be exquisitely lovely while doing so. 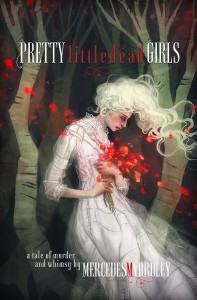 Bryony Adams is destined to be murdered, but fortunately Fate has terrible marksmanship. In order to survive, she must run as far and as fast as she can. After arriving in Seattle, Bryony befriends a tortured musician, a market fish-thrower, and a starry-eyed hero who is secretly a serial killer bent on fulfilling Bryony’s dark destiny. 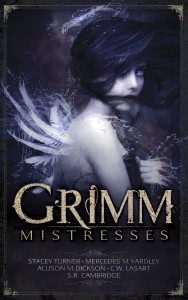 REMEMBER THOSE GRIMM BROTHERS? Dark fairy tales that made you leave the light on long before Disney sanitized them? Well, we certainly do! And now the MISTRESSES GRIMM take back the night, five female authors who will leave you shuddering deliciously. Get ready to leave the lights on again with five pieces of short fiction bringing the Grimm Brother’s tales into the present. Be advised: these aren’t your children’s fairy tales!