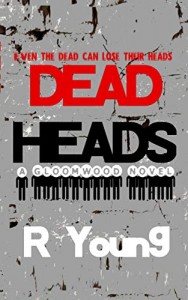 Augustan Blunt is a washed out cop with a bad attitude, a drinking problem and a troubled past, oh, he’s also dead but that’s okay so is everyone else. Other than that things are just peachy.

Someone has stolen the Grim Reaper’s head and Blunt has been told to find it. In a new city where the rules of the living don’t apply Blunt’s up to his neck in the brown stuff and he’s never been much of a swimmer. With the aid of a woman who keeps turning involuntarily invisible, a journalist who hasn’t written an article since she died, and a bureaucrat who can’t say no to anyone, Blunt’s got to stop whoever is stealing the heads of the city’s elite.

As he begins his investigations he finds things aren’t all they seem. Who are the Gloomwood Youth Order? What do you call the murder of someone already dead? Why are people having their heads chopped off? And what is in the hot dogs? With time slipping away he needs to learn what makes the city tick before there’s no city left.