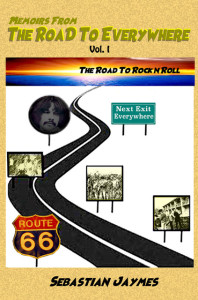 Author Sebastian Jaymes memoir of his personal journey from childhood to fulfilling his lifelong yearning to “see the world on someone else’s dime.”
The story of his early life takes the reader through many changes of scene and situation. Born the eldest of seven siblings, he begins the journey through childhood with an immigrant Grandmother’s arrival in America by way of an arranged marriage, brokered by the local “Godfather.” It is a childhood filled with pleasant family memories growing up “where the suburbs end and the countryside begins.” In early adolescence the situation changes traumatically. He is forced to Leaving Catholic School to face harsher realities in the public school system. There he encounters the first in a lifetime of bullies, as well as the racial divide of the early 1960’s Civil Rights era. A not so special teacher in Jr High School, a darker individual, casts a negative light on he and his family’s life. But In those years he also encounters two very special African American teachers, positive role models. It is by their inspiration that he blossoms. He also finds and cultivates passion and imagination through close friendships with like-minded individuals. He attends “High School Hell” in an inner city high school in an urban setting. It is a “prison movie” in a school fraught with serious dangers and mistrust by teachers, students, and hired handlers alike. When High School ends abruptly he enters the workforce as a factory laborer. “It feels like a life sentence.” There he confronts the fact that he may die a bitter man in mundane sameness, never fulfilling a lifelong ambition to see the world. Undergoing a mental and spiritual rebirth, and through a twist of fate, his best friend becomes a famous Rock Star and generously points him toward the freedom he has always craved, leading to his first job as a Rock n Roll “equipment manager” for two top name bands at the dawn of the Rock n Roll Touring Industry. (“We weren’t even called roadies then.”) Flying high through the 1960’s and early 70’s counterculture, he pays his dues with an up and coming band on a full-tilt ride through the bush league that ends in tragedy. Then he lands in Los Angeles and his journey around the world continues from the top levels of the overall entertainment industry Vol I is just the beginning of a young mans lifetime journey from a loving family on a path through the suburbs and the inner city school system, through Rock n Roll, the Entertainment industry, then onward and upward on a Road To Everywhere.