Posted Feb 14 2020 by TheButler in Interviews with 0 Comments

Thanks for inviting me back…

For any of our readers that aren’t yet familiar with your books, can you tell us all a little about your work?

My great-uncle, George Clarke Musgrave, was a war correspondent and journalist, seeing action with both British and American forces in West Africa, Cuba, South Africa, China, the Balkans and France. His articles from these conflicts were published in many national and international journals including: the Illustrated London News, the London Chronicle, the Daily Mail, Strand Magazine, Black and White Review and the New York Times. He also wrote a number of books which were readily published and well received by audiences on both sides of the Atlantic. Unfortunately, these are now out of print and first editions are rare and expensive. I believe, though, that his words should be read and I have dedicated myself to bringing his library back to life, I have written authentic versions of his books with a particular focus on preserving the action, the excitement, the drama and the emotion of his original narrative. These now form a series with the title of Wars and Words.

We understand that you have recently published two new titles in the Wars and Words series – can you let us know a bit more about them? 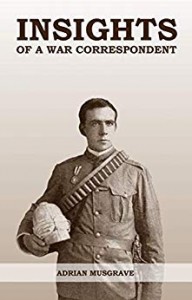 There’s one new book, Insights of a War Correspondent and I’ve also republished The Silent Trauma of War, which was completed less than a year ago. The new book has arisen from the realisation that George was never able to fully come to terms with the inability of our politicians and our best generals to make clear, correct and courageous decisions; or with the ignorance and incompetence of officials at every level; or the foul stain of corruption that sucks the very lifeblood from the fighting man. And he had to live with this through the five theatres of conflict in which he served. The time frame for this book spans a quarter of a century from George’s first commission to Kumassi in 1896 to his final trip back from America in 1921 at the end of his writing career. In the same twenty-five years, though, he also became a more frustrated, more discouraged and, ultimately, more troubled man. Finding out why – and how George lived with this – has been the driving force behind this book. Coincidentally, my research for this book also uncovered a whole raft of new information about George’s commission in 1900 to report on the Boxer Rebellion in Peking and this is what triggered the republication of The Silent Trauma of War.

How long did it take you to write your latest release, Insights of a War Correspondent?

I spent about three months on the writing itself but more than three years researching and preparing the source material – and it’s not finished yet. So, watch this space.

What is your work schedule like when you were writing?

Pretty strict really. When I’m researching I spend most days trawling through newspaper and other media records online – or in my local library searching out and following up references. Everybody who has ventured into the world of genealogy will know what this is like – and they will also know about the “brick walls” that have to be climbed. Then, when I reach the writing phase, I usually spend 3 to 4 hours each day with a fairly loose target of a chapter in a week.

Do you have any interesting writing quirks?

Not sure whether or not this may be of interest but two things come to mind. First, I like to write in the early hours, usually between 4 and 8 o’clock in the morning, before the world wakes up; and when I’m writing I like to build the story by adding layer upon layer from the research that I have done. It’s more about building and developing a story than working with a specific end in sight.

What do you like to do once your latest release is finished and published?

Total relaxation. I usually book a B&B somewhere that me and my wife have never visited – and then spend a couple of weeks enjoying that particular location – castles, cathedrals and museums are our favourites – together with (if I’m honest) searching out even more local references for George and the family.

What was one of the most surprising things you learned in researching and writing these books? 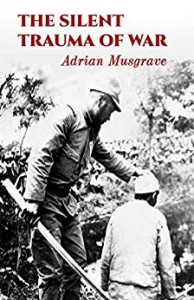 I am continually (and pleasantly) surprised by the amount of material written by and about my great-uncle George that keeps turning up – and by how different records often overlap, explain, contradict or reinforce each other. When George was in Peking in 1900, for instance, various press reports of the day claimed that he had been captured by the Boxers and was being held with George Morrison of the London Times and Sir Claude MacDonald. His own somewhat sketchy diary notes, though, show that he was, in fact, in hiding with two fellow journalists and that the three of them had shared a pledge not to write about the horrors that they had witnessed. So, he was lost and silent by choice, not by capture or imprisonment.

How many books have you now written, and how many more do you have planned?

There are now nine books in the Wars and Words series and, while I don’t have any immediate plans for more, I’m not at all sure that my writing is finished. My research is continually revealing more details, more facts and more answers but I still have a lot of questions and a lot of gaps to fill. I think that this is probably going to go on for some time yet – so, who knows?

What does your family think of your writing?

My research and writing has been going on every day in more or less the same way for about ten years. In general, everybody’s responses are pretty positive and, even though it’s not really part of our day-to-day conversation, I think that my family is pretty pleased that I am creating a platform for George’s work – and, book-by-book, bringing his library back to life.

Do you have any suggestions to help someone become a better writer?

Believe in your work, believe in yourself, ignore the self-doubt and keep going. And for my particular genre of non-fiction, military history and biography, I’m convinced that the quality of writing is totally dependant on research, more research – and then more research.

Do you hear from your readers much? What kinds of things do they say?

I’m always pleased when readers respond but what makes their comments special is when people recognise the level of research that has gone into each book. In a recent review for The Boxer Rebellion, for instance, one American reader said that:

“I’m an art historian and I appreciate historical accounts and other types of primary sources. They give me a portrait of the time period and are integral to research. I recommend this ebook for those interested in Chinese history. This ebook also contains photos, which add to the documentary appeal of the work.”

And, for me, that’s the sort of feedback that makes it all worthwhile …

What do you think makes a good story?

On top of dealing with the basic components such as; plot, planning, structure, style and so on, I think I’m fortunate in that my great-uncle George, the main character in all of my books, was a fascinating man who lived a fascinating life. His stories blend emotion, pathos, excitement and adventure with the realities of war and, for me, these are the elements that bring a story to life.

Where can a reader purchase your books or find out more?

Insights of a War Correspondent and The Silent Trauma of War are available on Amazon as eBooks and paperbacks, together with a full library platform of George’s books. The two websites at warsandwords.com and georgeclarkemusgrave.com operate in tandem to provide the definitive information source for George, his life and his work.

Insights of a War Correspondent
The Silent Trauma of War
The Amazon Library
WarsandWords.com
GeorgeClarkeMusgrave.com