Posted Dec 19 2019 by TheButler in Interviews with 0 Comments

Thanks for inviting me back.

We understand that you are republishing Wars and Words, the title book in your series covering the works of George Clarke Musgrave .. can you let us know a bit more about him?

My great-uncle George was born in Folkestone on May 1st, 1874. Following service in the British Army, brought to a premature end by injury and subsequent medical discharge, he became a war correspondent and journalist, seeing action with both British and American forces in West Africa, Cuba, South Africa, China, the Balkans and France. His articles from these conflicts were published in many national and international journals including: the Illustrated London News, the London Chronicle, the Daily Mail, Strand Magazine, Black and White Review and the New York Times. He also wrote a number of books which were readily published and well received by audiences on both sides of the Atlantic. His career spanned some twenty-five years during which he grew from a young but determined writer to a seasoned, brilliantly analytical and highly respected observer of war.

Tell us about Wars and Words, and what particular aspects of George’s life are covered in this book?

Each of the books that George wrote was a war correspondent’s account of a particular theatre of conflict to which he was sent by commission from one or more newspapers or magazines. Each of these conflicts was different in purpose, duration and outcome, and each of his books is correspondingly unique. In writing Wars and Words I have set George’s books chronologically within the timeframe of his career and woven together the diverse and tangled threads of his life story over the same period. George wrote in the first person and I have chosen to follow his narrative style so the book reads as a biography 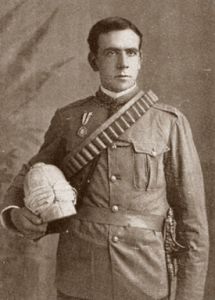 What is the significance of the title?

George wrote about the five wars that he experienced. He also penned the often untold stories of those left behind to suffer the iniquities and atrocities of wars that others fought. He held an undying admiration for the men and women who lived and loved, suffered and triumphed in their fighting. So, for me, his wars are inextricably linked with his words.

Can you share with us something about the book that isn’t in the blurb?

George was commissioned by the New York Times to cover the Boxer Rebellion in August 1900. When he returned to New Jersey just a few weeks later, he was a changed man. The horrors that he had experienced during his time in Peking had affected him deeply. He had lost interest in everything that had previously motivated him. He was not writing and, within a month, he left for England because, in his own words, he had to “get rid of his demons.” I believe that if this had happened today he would have been diagnosed with PTSD .. and it took him a full year to recover.

How easy was it to adapt George’s words while keeping his voice?

My work hovers somewhere between biography, adventure, genealogy and military history and I did experience some difficulties in maintaining an appropriate focus in my writing. I found that adapting George’s words was relatively straightforward when dealing with the core content of his original books .. but much more difficult in terms of drilling down to the often unwritten testimony that was his life story in terms of letters and telegrams, newspaper reports, military orders, diaries, travel itineraries and so on. I think, though, that by sticking to a first-person narrative, I have managed to maintain consistency and, I hope, readability

What were the key challenges you faced when writing this book?

I found it a difficult and time-consuming – but essential – task to uncover all of the tiny details that are necessary to knit together a cohesive and credible story spanning George’s life and work over some twenty-five years. Without any hesitation, I can state that the solution to this task was research, more research .. and then more research.

How long did the writing process last with this particular book?

I have been living, walking and dreaming with my great-uncle George for about ten years now and I’m not at all sure that my writing is finished. I’m regularly uncovering new facts, filling in gaps and confirming details from my research, all of which bring up new questions and, at the same time, opens new doors for me. I think that this is probably going to go on for some time yet .. so maybe Wars and Words will need to be republished again. 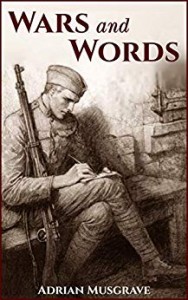 Have you had the chance to visit any of the places that George talks about in his work?

Yes. Me and my grand-daughter (who first came across George in a family tree that she built) have visited all the Musgrave family houses and shops in Folkestone where George grew up. We’ve also visited a number of the properties that he owned in London, Wimbledon and Swanage, where we were able to locate his grave. A bit further afield, I’ve been to New York, where George married .. and spent most of 1899 working with Theodore Roosevelt’s campaign team .. and to France, visiting the battlefields and following some of the pathways that he walked in the Great War. Looking ahead, I don’t know whether I’ll make it, but top of my wish list is a trip to Cuba, a country that George loved.

What kind of reader would you say that Wars and Words would appeal to?

I like to think that there are four particular interest groups here. First of all, are the military historians; second are those interested in the social and political impact of 19th and 20th-century history; third are those who enjoy biographies; and fourth, there’s everybody who likes a good adventure story.

And what would you like a reader to take away from the experience?

What would this book’s success mean to you?

In bringing my great-uncle’s library back to life, what I am trying to achieve is a unified platform where all of his books, diaries and essays are available to as wide an audience as possible. Wars and Words goes a long way towards this but my platform also includes adaptations of his original books, two websites that I have built, a library platform on Amazon and a continuing stream of information on social media. I believe that George’s words should be read and I am working hard to expand and develop all of these channels so that they become the go-to source of information for George’s life and books

Writing can be emotionally draining and stressful. Were there any parts of the book that you found harder to write?

George had a problem accepting the simplistic and often uncaring intervention of ignorant politicians .. and the seemingly crude life and death decisions of generals. He wrote of his frustration that those considered to be amongst our best soldiers, promoted to the highest military offices, appeared habitually incapable of making clear, correct and courageous decisions. This came to a head when he was in South Africa covering the second Boer War and, later, in Tientsin waiting for the order to march on Peking. People were being murdered by the Boxers while some 35,000 troops were held back by the generals of the eight-nation alliance. When Peking was eventually relieved, George actually stopped writing and, for the account of The Boxer Rebellion, I had no source material except for a collection of notes, diary entries, photographs, military briefings and despatches covering the four weeks that he spent in China.

How did you deal with the emotional impact of the book (on yourself) as you wrote the story?

With some difficulty. Like George, I spent a long time coming to terms with his experiences in Peking. I think that I understood something of the hell that he had been through and how he had suffered. In truth, though, I know that I was only seeing a glimpse of what really happened to him .. but this was enough to prompt me to write another book, The Silent Trauma of War, which proved to be quite a cathartic experience

Where can a reader purchase your book or find out more?

Wars and Words is available on Amazon as an eBook and a paperback, together with a full library platform of George’s books. The two websites at warsandwords.com and georgeclarkemusgrave.com operate in tandem to provide the definitive information source for George, his life and his work.