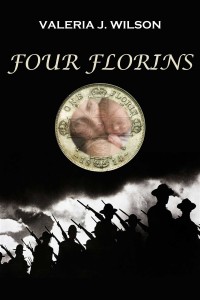 On May 21st 1915, an Edinburgh schoolgirl whispered to her sweetheart:“I’m just born lucky.” Then they said goodbye, and he left to join his Battalion, preparing to reach Liverpool by rail and embark for the Dardanelles. The following morning, more than 200 Territorials lost their lives in a train crash near Quintinshill junction, the worst rail disaster on British soil up to the present day.

“Four Florins” starts from here and follows groups of people, all somehow connected, through the war years, into the early 1920’s. Imaginary characters try to get on with their lives, in the midst of external events now part of history.

The Fenton family – John, chief reporter for the Edinburgh Courier, his elegant wife Dorothy, and their four daughters, Isabella, Anna, Constance and Jemima – were living comfortably in Edinburgh at the outbreak of the First World War.

Jim Nichol, a teacher, volunteers for the Front, and faces death.
His colleague Fiona McNaughton is no boring schoolmarm.
Peter and Ellen Beale are a well-off couple intending to adopt a baby.
Miss Margaret and Miss Marion Ballantyne are elderly spinster sisters with great big hearts.
Alastair Ballantyne is by no means who he seems to be.
The fascinating Dorinda Buckingham-Black leaves us wondering.

Some complicated relationships between them, a number of coincidences, the “stiff upper lip” mores of the time, all contrive to provide twists and turns to the story, right to the end. And beyond..