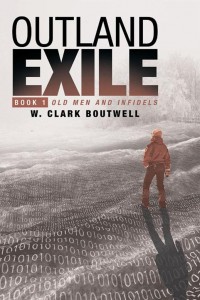 The world is getting older.

The world is getting younger.

The United States is dead and the Democratic Unity killed it.

After catastrophic wars and the Meltdown, The Unity rules from its East Coast citadel, leaving the outlands to savages and its strangely altered plants. Providing free health care, full employment, computerless surfing of its massive CORE, and rec drugs at quite reasonable prices, the Unity mandates retirement at forty before fatigue and error contaminate a culture of youth, innovation and vigor.
Seventeen-year-old Lieutenant Malila Chiu, is a veteran officer who, despite well-earned fame, finds her career in tatters. Vandalism at a distant “sniffer” station triggers her demotion. For her real and manufactured transgressions and facing denunciation . . . or worse, Malila’s one option is to enter the outlands to repair the station herself. At first, the repairs go well.
Dropping from fatigue, she wakes to find a hideously ancient savage, Jesse Johnstone, has murdered her platoon and now holds a knife at her throat, making her the . . . Outland Exile. 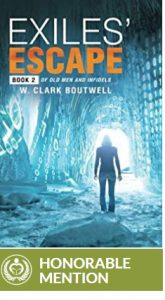 Malila is dead by her own hand—at least, that is what she hopes General Jourdaine and the entire Unity will believe. Middle-aged eighteen-year-old Malila Chiu has no choice but to escape her homeland. Making common cause with the strange subterranean workers of the beltways, Malila perseveres toward freedom in the Scorched fields of America. Nearly naked, with no friends, no resources and only a scant idea of the route, Malila’s only real information comes from time in the outlands. While a captive of the old, harsh-and-tender-by-turns Jesse Johnstone, Malila learned of the lies told her by her homeland and the truths shown her by the arrogant and contradictory Jesse. She thinks she may love him. If only he were not so strange . . . Pursuing Malila and becoming more obsessed with each failure, Jourdaine moves closer at each turn. Jesse, once again the target for assassination from old enemies, escapes to the skies, using a huge new American R-ship, the Illinois, in his own attempt to find Malila. Spies, subterranean poet-socialists, virtual entities, interfaces, and people—both good and bad—wrestle the Fates for survival and supremacy in a twenty-second-century America. 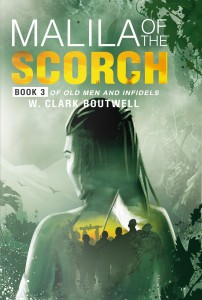 Malila of the Scorch: Book Three of Old Men and Infidels (Political Science-Fiction)

For the Unity, the lone surviving high-tech and forward-thinking remnant of a once-vital America, war represents a final chance to liberate the backward and unfashionable Midlands from their centuries-long nightmare of freedom and self-determination.

Young Malila Chiu, once a hero of the Unity, emerges from the jungle to deliver a dire message to a beleaguered America: the Deep Scorch, a polyarchy of sentient plants, declares itself to be a potent ally—or a dangerous foe. Familiar and distrustful of the Scorch for much of his long life, Jesse Johnstone stays by Malila’s side for the sake of their love.

The grand architect of the war, Unity General Eustace Jourdaine, recovering from grievous injuries, rallies to lead his troops into battle in the hopes of winning a new empire—but for whom?

All the while, within the bowels of the Unity, American spies, William Butler, Hecate, and Elise, delve into the secrets of the CORE and their own mortality to thwart the invasion.

Even as combat and betrayal swirl around him, the Old Man learns too late that this latest battle with the Unis may be his final one.