Posted Apr 15 2021 by TheButler in Interviews with 0 Comments 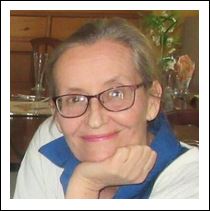 ML Holton: Hello all. – By profession, I’m an award-winning Canadian artist from southern Ontario, Canada. I live and work beside the magnificent great lake of Ontario and have been very active along its southern shore for over 40 years.

Few locals know that aside from my long-standing art practice is a dedication to the written word that has also spanned 40+ years.  I studied English Lit and Philosophy at University of Toronto, with an independent study year to pursue the ‘History of the English Language’ at the University of Edinburgh. After several years of other work, I returned to university to understudy with 2-time Giller Prize winner, M.G.Vassanji, in the Graduate Creative Writing Program at Humber College. In other words, I’ve played with words – their sounds and meaning – for as long as I can remember.

IBB: You’ve got twenty words to entice us to listen to your audiobook. What would you say?

IBB: How did you go about choosing your narrator?

MLH: I realized early on that I did not want to narrate TRILLIUM myself. I decided that a male ‘mid-Atlantic’ accent would appeal most to the global Anglophone community. I did try a native accent from South Carolina, but soon realized it was too fixed to work the other diverse accents in the story – French, Scots, Italian and Irish. I needed to find someone with a very good ear, as well as a natural ability to ‘perform’, so they could fully inhabit the personas of the characters.

I found such a person in the wonderful actor, Jens Hansen. He had done some earlier work for me when I had written a documentary piece about the poet, Robert W. Service, for Bricks Books of Canada. In that project, I had augmented the Service profile with Jens doing an outstanding rendition of ‘The Cremation of Sam McGee’. It was this stellar performance that convinced he was the man for the 14.5-hour audiobook version of TRILLIUM.

Jens has a colourful background in his own right. Surprisingly, his native tongue is not, in fact, English. He was born and raised Dutch-Danish. After early tumultuous years of African, Iranian, British, Bermudian and Canadian influence and exposure, his own English accent has developed an unusual worldly timbre that is very pleasing to the ear. People really do want to listen to him. 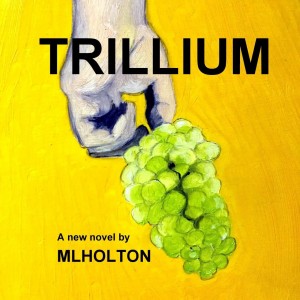 MLH: Anywhere, but best in my art studio. It’s quiet, beside the lake, with a huge picture window that looks out to the horizon …

And I like to keep a glass of watered-down orange juice or a cup of tea at the ready.

MLH: Oddly, I’ve always loved the Encyclopaedia Britannica and the Oxford English Dictionary. I can get lost in either tome for hours.

When I was very young, I was enthralled by illustrated versions of Ken Grahams’ ‘The Wind in the Willows’ and Charles Kingsley’s ‘The Water Babies’. In my early teens, I was impacted by the works of Hermann Hesse and Kahil Gabrain. … I did study English Literature at University but even then, with a Philosophy minor, I strayed far and wide in pursuit of clear, resonating and original ‘voices’. After graduation, I continued to explore near and far. As example, I’ve always gravitated to the kind of writing that art critic, John Berger, employed. His ‘Art of Seeing’ was a lovely, well-crafted exposition. It titillated and provoked as much as it massaged and amused. Closer to home, I’ve always liked Alice Munro, as a short story writer. Few can touch her ability to create believable atmosphere. Few can touch her ability to create emotional juxtapositions that resonate long after the reading.

MLH: Conversation. When I was very young, my parents were a very smart, social and witty pair. From them, I learned a great deal about dynamic social interaction and the effervescent ‘dance’ of dialogue. From them, I also learned that a skilled orator – who listens very closely to the engaged audience – can hold a room enthralled for hours. I’ve see it. I’ve witnessed it. Over the years, I have come to understand the joy of giving pleasure to others in this very human way. I do try to incorporate that sense of good story-telling in my own efforts on the page.

IBB: What do you want to achieve most from your work?

MLH: I suppose, long term, I would like to achieve recognition as a distinctive ‘voice’ from this point on the planet.

I think of my varied works as seeds. When these seeds are absorbed into another’s imagination, a hybrid pollination occurs. New perspectives and new sprouts will grow. In this way, good writers pass on their unique, yet familiar, knowledge of humanity, to other readers and writers.

IBB: Have you received a favourite review?

MLH: It was delightful when one of the beta readers of TRILLIUM asked to read an earlier novel, The Gilded Beaver. After the fact, she wrote she felt “deeply immersed” in the story. It was very gratifying that she allowed my created world to so fully envelop her. (It’s akin to being with a good friend on a long walk. As you meander and chitter-chatter, you slowly share a pleasing and wholly natural life experience together. That shared experience in time and place underscores a common kinship of understanding. You both reach out and get to know each other better.)

Conversely, a bad review reminds me that I must work harder to write better. Writers are caretakers of words. We have a responsibility to use their immense power to the best of our abilities.

IBB: Were there any particular parts of the audiobook process that you struggled with? 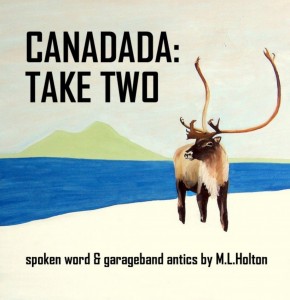 MLH: After the recordings by Jens were completed, I recognized that I needed some technical expertise to polish them up. I had to remove some unnecessary ticks and clicks. I hired an audio engineer to do that. Craig and I then worked through Jen’s 14.5-hour effort adjusting the performance to meet the distributor’s very precise audio specifications. (I went with Audible, an adjunct of Amazon. They supplied the end recordings to iTunes too.)

Audible is a huge and somewhat impersonal ‘on-line’ enterprise. During the COVID crisis, the audiobook release of TRILLIUM was delayed for months, and then delayed again after we were instructed to add a ½ second to the start of the opening file. In retrospect, if an alternate and more personable business could have provided the necessary distribution to Amazon and iTunes, I would most likely have signed the compulsory 7-year contract with them. – Live and learn.

MLH: I write something every day. It may not be a ‘public project’. It may just be random ‘notes to myself’ on my laptop or a hand-written entry in my journal. It may even just be a long-winded email or an interview, like this. Writing has to be exercised, like a thoroughbred, to stay in shape.

IBB: What is the ideal relationship between narrator and author?

MLH: Luckily, Jens and I get along very well. Throughout the 6-month audiobook effort, we maintained a very professional relationship. He knew he was hired to do a job to my expectations – and he delivered. No complaints.

MLH: Thank you so much for sharing some of my life with yours.

MLH: Read more than you write, and write something – anything – every day.

If you want to be a real author, do not quit.

MLH: It is wide and wonderful. I am limited only by my own physicality. The body ages.  The mind does too, but in a completely different way. As long as my mind continues to work reasonably well, I know I will write.

MLH: Since I am a visual artist, it just makes sense to use my own artwork on my books. I also have some background in typography and design, so I do what is pleasing to my eye. I know it is not to everyone’s taste, but it does suit me and my written work.

MLH: A compulsive reader, I will devour just about anything in all genres – except horror. (I’m not interested in brutality for brutality’s sake. There’s quite enough of that going on in the ‘real world’. There’s no need, as far as I am concerned, to devote much energy to it in the imaginative sphere.)

IBB: Before we finish, we’d like to take the opportunity to ask your narrator, Jens Hansen, a couple of questions. Jens, how did you get into audiobook narration? 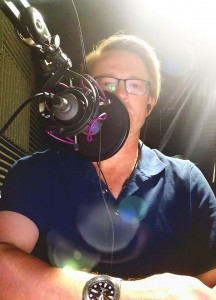 Via Jens: Trillium is my first audiobook. MLH pressganged me into it!

IBB: What was the best part about working on this particular audiobook?

Via Jens: Getting to know local history better and I enjoyed working on the various voices of the multiple characters in Trillium. The ending was brilliant.

IBB: Were there any challenges involved?

Via Jens: Keeping my neighbours’ quiet! – Neighbourhood lawnmowers, planes and helicopters flying overhead were certainly a challenge as I was working in a tiny recording studio with no air-conditioning during hot summer months. It was a pleasurable challenge to work with Lindsay. (Just kidding MLH!) – TRILLIUM really is a wonderful family saga that will appeal to a large group of listeners – young and old, male and female. – Have a listen!

Thanks for taking the time to answer our questions. Best of luck to you both in the future.

For more on M.L. and her work, please visit: