Posted Feb 8 2021 by TheButler in Interviews with 0 Comments 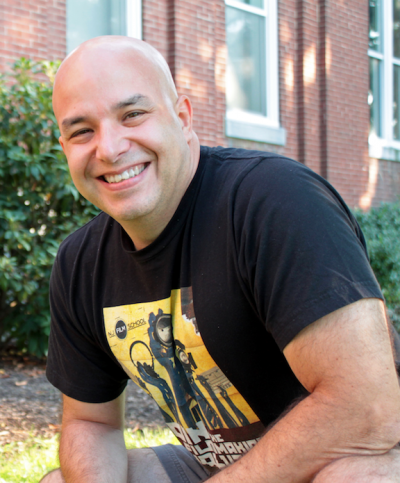 William D. Prystauk: Hey! I am William D. Prystauk, an award-winning author, poet, filmmaker, podcaster, marketer, and educator. Currently, I work as a medical copywriter assisting healthcare professionals with clinical material to best help their patients. Outside of employment, I am also raising money for my first feature film as I work on the fourth novel in my Kink Noir crime fiction series.

A native of New Jersey, I reside in eastern Pennsylvania, believe that chocolate is a major food group, and never leave any sushi behind.

Whenever I am not writing, I am either reading or watching a movie or indulging in photography. 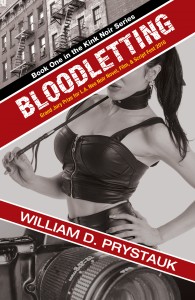 From my career in marketing, I learned to be creative and write on demand. However, I prefer a quiet space (right now, that’s most often my kitchen table). I used to listen to music while writing but that quickly alters my mood and changes the tone of the narrative.

WDP: A computer with internet access. Although I spend months researching my stories for both plausibility and accuracy, including interviewing professionals in their respective fields, I may have to check something on the fly. I also prefer typing in the late evening or early morning when the world is sleeping – because less noise and interruption means I can get more accomplished with the manuscript.

WDP: Muriel Sparks’ “The Prime of Miss Jean Brodie” due to her seamless transitions, Henry Miller’s “Tropic of Cancer” due to his grit and poetry, Ursula K. Le Guin’s “The Lathe of Heaven” due to its scope and social commentary, Gabriel Garcia Marquez’s “One Hundred Years of Solitude” because there exists a story in every page, William S. Burroughs’ “Naked Lunch” because it is a remarkable anti-novel novel, Frederick Busch’s “Girls” due to its sincere soul, and Ellen Miller’s “Like Being Killed” because of her overall magnificence as a writer.

A great book affects me on all levels and contributes to me becoming a better person and caring more about the world.

WDP: Teachers. They have helped guide and mentor me in many ways. Most important, I learned more about what not to do as a writer.

Those teachers have also pointed me in the right direction when it comes to improving my craft. For that, I am eternally grateful.

WDP: I want to entertain readers.

As for hard-boiled crime readers, I want to bring them something devoid of tropes and formula. I had spent too many years reading the genre and its manly men talking tough and shooting up the room in PG-13 style.

My novels are for adults who want something a little more visceral in regard to language, sex, and violence – though none of it is gratuitous.

Most important, my main character does not fit the mold of the hard-boiled detective. Denny Bowie is a long-haired punk rocker without a military or police background. He gets his butt kicked on occasion and sometimes doesn’t get payback. Bowie cares, is vulnerable, and tries his best to negotiate love for his girlfriend as well as his boyfriend. With each novel, he grows a little bit more and becomes a better person as he tries to overcome his personal flaws. 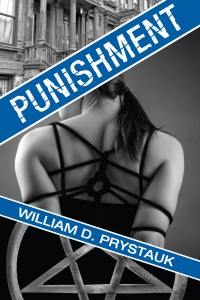 WDP: For my latest novel, Debauchery in the Kink Noir series, I received this phenomenal review on Goodreads that almost brought me to tears (https://bit.ly/2N0PFWY):

The back cover gives you an idea of what to expect, but the reality of “Debauchery” – the third book in Prystauk’s “Kink Noir” series – is a cornucopia of seemingly disparate ideas and characters (drug dealers; Karate experts; rich kids with a bent toward the perverse) that synthesize with surprising clarity and effect. This time out, PI Denny Bowie is working a missing-persons case, and the fact that the story doesn’t start off with a dead body is telling of the novel’s unconventional approach. For a time, it feels as though the various excesses exist for mere shock value, as Prystauk takes fetishes and sexual encounters to a plane of graphic detail I haven’t seen in a long time. But there’s the interesting thing: Denny’s notions of extreme pleasure (of the consensual, masochistic variety) are contrasted with a midway plot twist that’s as nauseating in its description as the subsequent aftermath is tender, considerate, and compassionate. While the characters of Penny and Vara aren’t my particular favorites in this series, just when I figured their function in this narrative was peripheral (reinforcement for our beaten protagonist), they become actively interesting and productive at key points in Denny’s investigation and personal/spiritual journey. Strange as it may sound, but for as much as Prystauk will have your jaw on the floor with his descriptive prowess, there’s a beating heart beneath all the “Debauchery.”

WDP: My first novel, Bloodletting had received great feedback from professional editors even at well established publishing houses. Yet, due to the trappings of traditional publishing, I also received rejections that were actually letters of apology. No one knew how to market a mystery series where the main character is a bisexual solving crimes in oft maligned communities in Greenwich Village.

Ultimately, I found a small publisher in Seattle, but they did not know how to market the book either. Three days after Bloodletting won the Grand Jury Prize at the Los Angeles Neo-Noir Novel, Film, and Script Festival, they closed their doors.

Several years later, I found a micro-publisher in Seattle that reprinted the first novel and unleashed the sequel, Punishment. Again, due to marketing concerns with that publisher, we parted ways in friendly fashion, and I have since landed a long-term contract with End of the Line Publishing. They delivered Debauchery and will publish the subsequent novels in the series.

WDP: I read novels and watch films inside and outside my genre, plus I study craft all the time. In addition, I take what I have learned about storytelling from writing screenplays, as well as from my marketing and medical copywriting experience.

Writing can never be mastered, but one can certainly improve.

WDP: An editor is not the enemy!

The editor will help the author create the best story possible for audiences, making the editor a phenomenal teammate. I am grateful that I have had such helpful and insightful editors, like Patricia Eddy and Angel Ackerman, who grasp the craft of professional storytelling.

The ideal relationship is for the writer to trust their editor’s recommendations and for the editor to grasp the author’s vision. 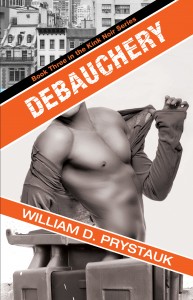 WDP: For those who hate: Sorry, the book was not meant for you but I hope you can give it to a friend who finds the narrative worthwhile.

For those who love: Thank you so much for the validation – and there is more to come…

WDP: Study craft. Just because you learned how to write in school does not mean you are ready to tackle a novel.

I had made that same mistake and after three failed manuscripts, I realized my writing was awful because the stories did not work – and that I was not getting any better as a writer of letters. That’s when I took a break from writing to study craft, and ended up earning an MA in English as well as an MFA in Creative Writing. Most important, the compactness of screenwriting truly taught me how to become a better storyteller.

Along the way, remember to be honest with yourself and accept criticism. If you cannot handle criticism, then you may want to think twice about making your work available for public consumption.

WDP: I am working on my fourth and fifth novels in the Kink Noir series, and I am currently raising funds to bring a thriller script to life as a feature film. I also have a horror feature film script I hope to write soon. Plus, I get my writing exercise in every day as a medical copywriter.

WDP: I work with Paul Belci. He is a professional graphic designer with over twenty years in publishing, and he has an MFA from Pratt in New York for added muscle.

Since he is the professional when it comes to images, color, font, and cover design, I left those ideas to him. He presented me with several varieties of cover options and I chose one, and we have continued from there. Belci is a dream to work with and has become another teammate in the book development process.

WDP: I read every day. Albeit, I am a slow reader, but I love fiction of all sorts – as long as the writer knows craft, has a unique style, avoids formula and tropes, and understands how to best deliver a quality narrative.

WDP: Morowa Yejide is an absolutely brilliant writer. Her novel, Creatures of Passage has recently been released from Akashic, and I must get my hands on it. Yejide had written a short story about her experiences as a Black woman in Japan called “Tokyo Chocolate” and it is mesmerizing. She is one of the very few writers (Hawthorne, Hemingway, and Busch) who has brought me to tears from her incredible words and the emotions they conjure.

Ross Klavan’s novel, Schmuck is an amazing and captivating tale from story to characters. Klavan can traverse an emotional landscape of comedy and drama and hope and sorrow like few can. I only hope his next novel comes out soon because the world needs more creative voices like him.

For more on William and his work, please visit: