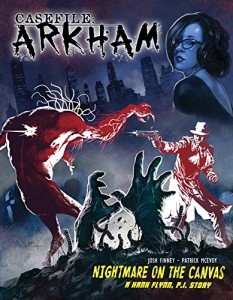 The year is 1946. The place is the most cursed city on Earth—Arkham, Massachusetts (a.k.a. the heart of Lovecraft country). Hank Flynn is a down on his luck private eye whose fate is inextricably linked to the bizarre and arcane underworld that exists in Arkham’s shadows. Haunted by the memories of his time in the war, and plague with visions of a nightmare world that boils at the edges of our perception, Flynn is fated to peel away the thin veil of reality and confront H.P. Lovecraft’s most enduring horrors (whether he likes it, or not). And things only get worse for Flynn when a wealthy (and beautiful) uptown socialite hires him to track down an artist by the name of Pickman. What begins as a simple missing persons case leads Flynn down a dark path of flesh eating ghouls, vengeful witches, and the notorious Innsmouth mafia.

…the dark, mesmerizing graphic novel that fandom has needed for a long time. A fresh new series of what promises to be a staple in the noir fan’s library behind a strong voice in both a literary and an artistic sense. The characters were beautifully created, vivid and plausible. I also loved the dialogue; as snappy, wry and acerbic as one could hope from the best hard-boiled detective story.
–Amazing Stories Magazine

Casefile: Arkham succeeds where so many genre mashups fail in that both genres being combined are executed with absolute integrity. Finney and McEvoy make sure their respective recipes for detective fiction and Lovecraftian horror taste as they should before throwing both into a burbling cauldron from which rise the engrossing (and gross) adventures of Hank Flynn, P.I. Let this book scratch your itch for cosmic horror and hardboiled noir, and you’ll leave with permanent scars. -Phil Hester (The Flash, Wonder Woman)

Casefile: Arkham blends the best of old school noir with mind-bending horror. It’s the Reese’s Peanut Butter Cup effect. Two great tastes that taste great together. If that doesn’t peak your interest, I don’t know what will. –HorrorTalk

I can’t say enough good things about this book. The story is good, the characters are deep and realistic and the art is beautiful. Casefile: Arkham is a work of art and a good example of how art and great storytelling can be combined to make the perfect graphic novel. –HorrorAddicts.net

The usage of Lovecratian monsters/ghouls is neither underplayed nor overplayed. They’re given fantastic build-up that when the big climax happens it’s extra effective. In a story like this, a careful balance between showing and not showing them is the goal, and it’s certainly achieved. – Daniel Alvarez / UnleashTheFanboy.com

This is a really amazing book, with a lot of really cool references and hidden meanings. If you don’t know them, you’ve got a really good story. If you do know them, you’ve got a really amazing story. There are certainly more of them than I would have expected…but they did keep my eyes glued to the pages, looking for more. The plot itself is really interesting with supernatural ghouls and real magick (with a “k”) being explored. This is definitely up my creepy alley. It’s definitely worth the read, so give it a read as soon as you can… –ComicWow.com

this book is a tonal achievement the likes of which is staggering, especially when you consider the elegant simplicity and relative ease with which creators Josh Finny and Patrick McEvoy find the overlap between the dark, rain-soaked alleys of Noir and the darker, blood-streaked monoliths of Lovecraft –Joup Magazine 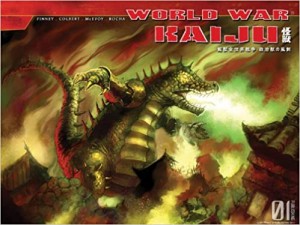 What if Doctor Strangelove created Godzilla? World War Kaiju is the story of an alternate history, one in which the atom bomb was never created and the ultimate weapon of mass destruction is the kaiju fifty foot tall radioactive beasts spawned from the mysterious KAI-235 isotope. Follow the journey of one journalist as he teams up with a retired CIA operative to uncover the truth about the conspiracy behind the monsters… …who are the architects of the inevitable Kaiju War? …what is the shocking secret behind the mysterious KAI-235 isotope? …where did Cuba manage to hide a crab monster the size of an aircraft carrier? …why are rogue monsters appearing all over the world? …how long can Tricky Dick keep these truths from the people? 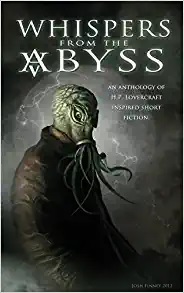 On the subway, during lunch, or even under the fluorescent glow of your cubical there is no escape! Now your slow descent into madness can follow you through the day, as well as the night. The WHISPERS FROM THE ABYSS ANTHOLOGY is the first ever H.P. Lovecraft inspired collection created specifically for readers on the go. All 33 spine-chilling tales are concentrated bites of terror which include works by Greg Stolze (Delta Green), Nick Mamatas (Shotguns v. Cthulhu), Tim Pratt (Marla Mason), Dennis Detwiller (Delta Green), Greg Van Eekhout (The Boy at the End of the World), A.C. Wise (Future Lovecraft), David Tallerman (Giant Thief), Silvia Moreno-Garcia (Future Lovecraft), John R. Fultz (Seven Prices), Chad Fifer (The H.P. Lovecraft Literary Podcast). 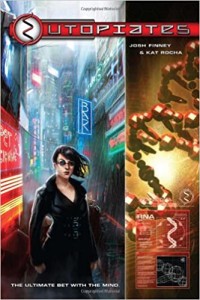 In the future, science has formulated a way to distill human personalities into a drug-form. On the street, they are called Utopiates and allow the user to swap personalities with the mental imprints of other people… for a short while. Within these pages you will follow the interconnected lives of individuals who inject the souls of others. Each is a user for their own reasons, but all learn the cost of soul swapping is extremely high. 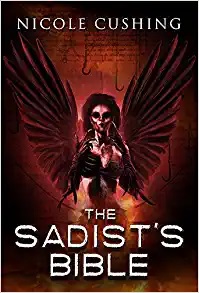 2016 Bram Stoker Award® Nominee for Superior Achievement in Long Fiction
2016 Shirley Jackson Award Nominee (Novella category)
What is Heaven? What is Hell? Ellie lives with the fear that she is an abomination. An affront to God. If her Bible Belt community were to ever discover Ellie s desires for the intimate touch of a woman, then her husband, pastor, friends and neighbors would all despise and shun her. But by way of the world wide web Ellie finds a kindred spirit in Lori Morris a beautiful young woman with a hideous secret. Brought together by their lust, their shame, and a shared sense of hopelessness, Ellie and Lori agree to end their lives in a single night of sex, torture, depravity, and finally suicide in a luxurious hotel. But Lori has another agenda: to escape an oppressive force that could be God, or possibly the Devil. In truth, He s something far, far worse. Just remember: He wants us broken.