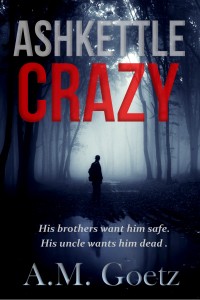 His two older brothers will do anything to keep him safe.

A crazed killer will do anything to see him dead.

When Dack Ashkettle witnesses a neighbor’s murder, he’s left with two grim choices – run or die. That’s when older brother Bo steps up and spirits Dack away to the mountains where safety, sanity and their oldest brother awaits.

Deep in the wilds of the Adirondacks, the boys find safe haven. Have they finally earned their freedom? Or is any place really safe when a madman wants you dead?

Fans of “Stranger Things” and Stephen King’s “The Body” will appreciate this new, nostalgic tale of epic camaraderie between brothers.

An inspiring story of survival and the battle between good versus evil, this psychological thriller keeps fists clenching and emotions cartwheeling from the very first page. 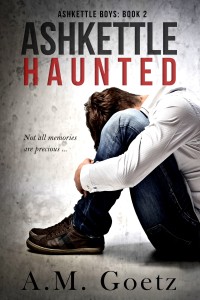 A.M. Goetz returns to the wilds of the Adirondack Mountains to revisit the compelling world of the Ashkettle Boys – three brothers struggling to help each other in the aftermath of a traumatic childhood.

Dack Ashkettle is just your average sixteen-year-old who likes cats and hiking, adventures and good times. He’s the youngest of three brothers, and when he’s on, he lights up a room like sunshine. But when he’s off, everything around him is cast into darkness, his brothers most of all.

“It wasn’t the kind of dark that could be assuaged with the lighting of a candle or with the warmth of hot coffee and good company. It was black and oily like tar. It was cold and consuming like the worst winter storm, and the first time I saw Dack turn himself off, it terrified me.”

Finally free from his abusive uncle, Dack has found peace and safety with his two older brothers, deep in mountains of upstate New York, where he struggles to work through the terrifying memories that haunt him. But the mind is a curious thing, and when Dack begins having frequent black outs and periods of inexplicable aggression, his brothers suffer the brunt of his illness.

Will the determined love of his unconventional family be enough to wrest Dack away from the demons that manipulate him? Or will he succumb, dragging the people he loves most over the edge and into the bleak abyss beside him?

“Well written, with an understanding of the kind of trauma abuse can cause, this book gives an in-depth look into depression, PTSD, and the scars abused people carry on the inside.” — Nerd Girl.

Read what people are saying about the Ashkettle Boys Book Series …

“A well written thriller that grabs you from the first page!” — J. Steig.

“In the midst of intense suffering, love and faith win!” — Mamatr.

“There’s no way you’ll come away from this book without feeling a little less lonely, a little less misunderstood, and a little less like the world is personally out to get you. Because if these characters can get through their troubles, there’s hope for all of us. This is a book to read, to ponder, and to absorb.” — Amazon customer.

“Once again, A.M. Goetz pulls you in and doesn’t let you go until you’ve experienced the gamut of human emotions.” — Heather.