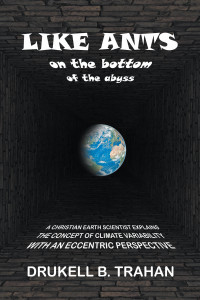 Like Ants on the Bottom of the Abyss: A Christian Earth Scientist explains the Concept of Climate Variability with an Eccentric Perspective (Non-Fiction, Science, Philosophy, Spirituality)

The world public is woefully uninformed. And there is hardly a lack of information greater than in the realm of science, or it’s not presented in common terms that the majority of the public can understand. This ignorance can be abused by those in power wanting to further their agendas.
The climate change debate is fueled by the assumption that climate variability can be controlled by man-made changes in planetary dynamics greater than natural atmospheric oscillations, that the use of fossil fuels causes these changes, and that two hundred years of data out of thousands is enough to prove or disprove the destruction of our planet by humans.
That mankind has this kind of influence—as insignificant in space and time as it is compared to the size, age, and energy of creation—is within the shadow of reason and doubt. Yet as the only known survivor of creation and the only known conscious life in the universe, mankind has sole stewardship and the responsibility and duty to harness the energy of the universe, use it to its advantage, and respect it.