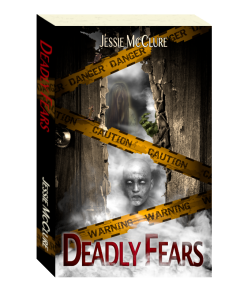 A book of tales where the unexpected should be expected. Where an ebony-clawed demon is a friend and a doting mother is the monster. Where fear is sometimes broken by humor.

A grim reaper obsessed with collecting the flesh of his victims is hunted by an entity with an obsession of its own—him. Will he be able to solve the mystery before he loses his own desiccated hide?

A deadly mistake has occurred at one of Hell’s premier human-possession facilitation agencies. With screams echoing through the travel agency and blood oozing under doors, can the demons handle the situation or will Hell-land Security have to save the day?

A large metallic alien orb, dormant for months, has activated. Do scientists know enough to save themselves, much less humanity?

When Tony moved into his grandparent’s home, he didn’t expect to be terrified at every turn by a ghost intent on harming his sister. Is there a way for him to save her or is it already too late?

Enjoy Deadly Fears —eight stories that will linger in your mind long after they’ve ended.