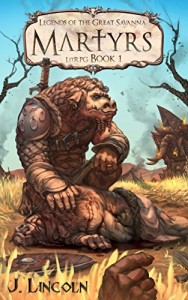 After being approached by the military with a contract he couldn’t refuse, JAMES winds up uploaded into a virtual reality game as a beta tester. Waking up in the Great Savanna, James struggles with a less-than-useful interface before he comes across two creatures locked in battle. The shoulder high grass allows him glimpses of a lion-esque creature fending off a torrent of scales and claws. Sneaking up to steal a better look at the surreal situation, James discovers two things.

1. Getting hurt in the game…. well hurts!

2. This noble race of lion-men, named Martyrs, have almost been decimated by the scaled lizard creatures.

By unwillingly saving the life of a Martyr cub, James is adopted into their village. He grows to love the beauty of the Great Savanna and his adopted game brother, whose life he saved… That is until PATRICK arrives, and the tranquility of the game is shattered.

James embarks on a mission for answers to his steadily increasing list of questions. On the top of that list,

“What the hell happened to the human race, and where is my damn brother!?”