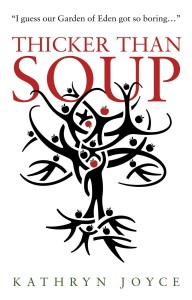 Focussed on their careers, Sally Lancing, the daughter of a Pakistani immigrant and English mother, and John Sommers, the much-loved son of adoptive parents, are equally committed to a child-free future.

Then a surprise pregnancy – and doubts about the paternity – hurls them both into new, but separate, lives. Devastated by the loss of her job, her partner, and her home, Sally and her baby son embark on a journey to Pakistan to meet her father’s distant family. Once there, Sally’s eyes are opened to a world that challenges her deepest beliefs.

Meanwhile, John hides his vulnerability behind increasing success as a restaurateur. But the baby has rattled skeletons, and, unable to avoid his past, he too embarks on a journey – to find his birth parents.

As their horizons broaden and their views are challenged, the child, Sammy, is an innocent but enduring link. Thicker Than Soup is a story of love, loss and discovery that explores the concepts of morality and independence as Sally and John attempt to build separate futures. Until, that is, providence stirs life’s mixing bowl once more, and Sammy is again the crucial ingredient.

Thicker Than Soup is a moving tale of relationships set against a backdrop of both Thatcher’s Britain and a beautifully evoked Pakistan. Inspired by The Ginger Tree by Oswald Wynd, the novel explores the serious issues of cultural integration and diversity as well as adoption, and also, the devastating shock of HIV.