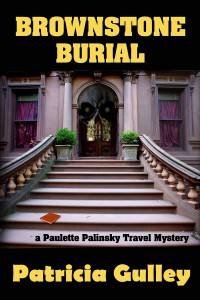 Pauline Palinsky leaves her small town in 1963 to escape her reputation of cavorting with spirits. She goes to airline school and looks forward to a new life and seeing the world as a reservations agent in the big city of New York. But when she finds herself falling in love with those wonder houses, Brownstones, and rents a studio in one, she forgets how old they are and what secrets they may hold.

The first ghost to make contact used to be an NYPD detective and knows exactly what she needs to do to get his murder case reopened. Reluctantly, Paulette agrees, and soon learns that three murders happened that day in 1947. Complicating things is the fact that her landlord is the son of the first ghost and the nephew of the other two murder victims, and he doesn’t want her poking her nose into his family affairs. Pauly finds herself sandwiched between the living and the dead when finding clues that soon involve the airline she works for.