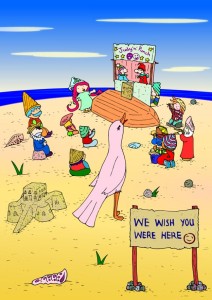 We Wish You Were Here – Children’s

An audio adventure book featuring the Shellies and their music. From the first ‘Ahoy!’ to the last ‘Hush!’ this is a story which all the family can enjoy tide after tide again. Imagination and fun will bob like boats upon the sea as you listen to Crabby and the gang’s latest exploits. It all began ‘once upon a tides’ when the laziness of a summers day in the garden was suddenly disturbed by a thud on the lawn. Seeking the cause of the noise led Sally on an unexpected fun-filled journey to Shellie Bay. Travelling on a glider alongside the pilot (Rainbow) the pair took flight. Waiting to greet them on the shore were the merry bunch of Shellies and their cousins the Boggles. With her new friends leading the way, Sally followed the ‘footprints in the sand’ in an attempt to find the pirates lost treasure.

Along the way she uncovers the secret of why it is the singing sands sigh. Disappointed at not finding hordes of treasure and booty, Pearl reminds the troop of ‘funsters’ that sometimes nature’s treasure can be more precious. As twilight descended upon the bay Sally laid back on the sand to listen to just one more ‘Shelliestic’ song before drifting off to sleep, only to be awoken a few moments later by her mother calling out her name. 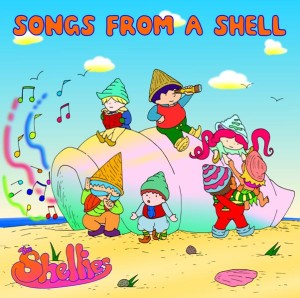 Songs From A Shell – Children’s

Sea and land lovers Ahoy! You will be enthralled with this ‘shellieastic’ audio adventure featuring The Shellies, Boggles and the rest of the merry bunch. Journey along to Muckle Flugga fair, spin in a what-not and discover how a Jolly Jack made Crabby cross. Who would have thought that a box full of wind could be so useful? With squeaking fiddlesticks and ding dongs ahoy this is one adventure which will provide wave upon wave of fun for you to surf along. Talent shows, puppet shows, songs, owlers in the moonlight all appear in this beach full of stories. From the moment Barnacle booms out one of his old sea customs, till Crabby splashes in a puddle on the cove, the ‘funtastic’ crew will both enthrall and entertain. Listen along and you will soon discover that ‘once upon a tides’ really can come true. 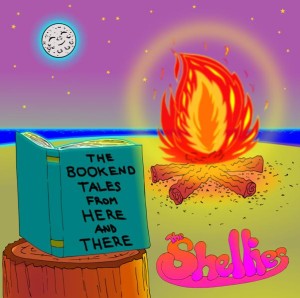 Bookend Tales From Here and There – Children’s

Welcome aboard another fun packed tale from Shelie Bay where waves of fun wait on the shore to greet you. Whiz along to distant shires and dales where folklore and legend tumble by to add extra sparkle and magic to your adventure. Moments in history tiptoe side by side with music and fun. Fairies, pixies, goblins and mermaids all make an appearance as the merry pals sit around a beach bonfire telling tales from ‘here and there.’ Discover how a twist of fate and fun possibly assisted Sir Issac Newton in his quest to discover gravity. Listen in as Crabby, with just a jot of help from the others, attempts to explain the difference between light and sound.

Discover more on The Shellies at: