Posted Apr 28 2015 by TheButler in Interviews with 0 Comments 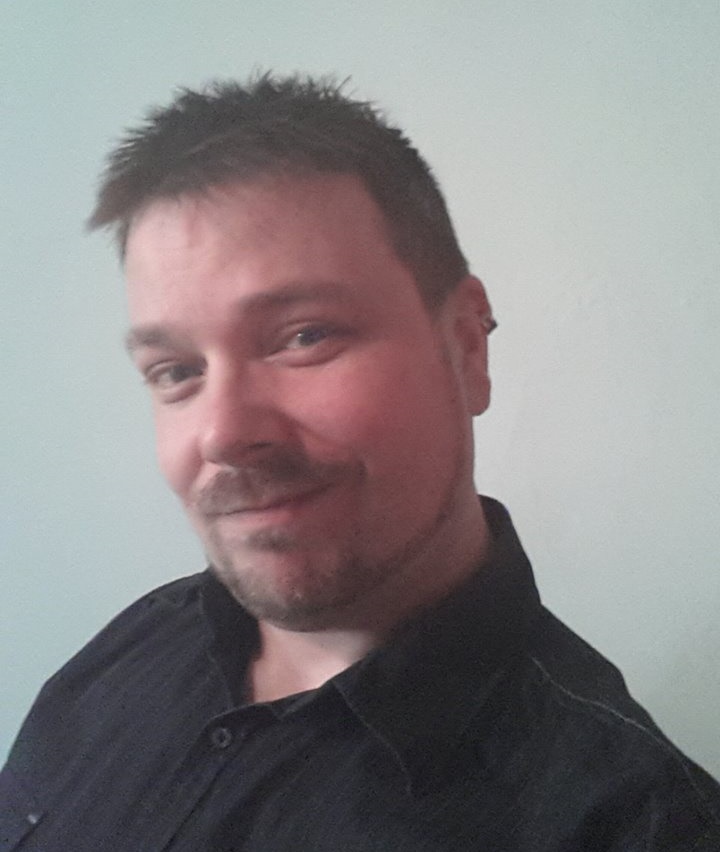 My life kind of reads like a grab bag from the house of random. I’ve been everything from a circus trained juggler to the lead singer of a rock band. Some say that I’m also a dandy highwayman, but that’s unconfirmed. All this has transpired in the sleepy isle of Great Britainshire. I suppose that’s what pushed me towards the style of stories I find myself writing. Psychotic clowns, evil Santas, floating pirate ships, book munching superheroes, fairytales that refuse to play nice. My head is fairly wedged in the clouds, which I like, because absolutely anything is possible in there.

I am lucky in that I live in the middle of the nowhere. No distractions, a huge comfy armchair, and the occasional prompt from my feline muse, Chewy.

A glass or ten of fermented red grape juice is essential. For some reason, I prefer to only write when the moon is up, too. Perhaps I am some kind of literary werewolf, although that would also be unconfirmed.

I’ve always been a huge fan of the unusual. In that regard, Douglas Adams’ The Hitchhiker’s Guide to the Galaxy has always been my absolute favourite read. Anything by Terry Pratchett or Robert Rankin also fits the mould perfectly. Add a dash of Stephen King, and you begin to see why I like to mix the macabre with the mirthful.

Other authors. There’s a whole community of wonderful, friendly, supportive scribes out there, who are only too happy to lend a hand or offer advice. Having your first novel published opens up a massive new world, so it’s nice to have a few Yodas here and there to dispense wisdom when you need it most.

It’s a difficult question, considering that I originally wrote The Forty First Wink simply because I wanted to pen a novel. Now, with the sequel nearly ready to launch, and a trilogy forming, I’d love to have as many people as possible get on board the Fathom, and take a trip. If I really had my wish, and after hearing so many people remark how much they’d like to see a movie adaptation of Wink, I would dearly love to see my characters scuttle onto the silver screen one day.

I absorb, and take everything in. There is such a rich tapestry of inspiration going on in any given day, that it pays to keep your eyes open and a pad handy. Even little quirks and asides that may seem insignificant at the time can add real depth and realism to a character. Or make him even more demented, depending on who you’re scrutinising.

As little red pen as possible! Of course, it’s extremely important, and they’re there to give your work the professional polish, but it’s nice when it ain’t broke and doesn’t need fixing. I’m sure editors prefer it that way, too.

Thank you for taking the picture I had in my head, and recreating it in yours. I hope that I haven’t loosened your mooring in reality too much!

You can’t please all of the people, all of the time. In the end, I’m just writing about what makes me happy, and hoping it does the same for others, so please don’t hate me for it. Or throw things. That’s just rude.

Don’t force it. If you’re not enjoying what you’re writing, it’ll show. If you hit a dead end, take a break. Have a think (and a drink), and come back to it with a different perspective. Your muse, your mojo is what powers the story. It’ll get you there, but don’t poke it with a stick when it just wants to have a night off. Never enrage the mojo.

I have a bunch of short stories coming out in 2015, ranging from a Christmas story about a psychotic Santa Claus, a treehouse seige between a group of boys and a gang of impish demons, and a cautionary tale about not burning down a forest with a troll in it. Then of course, there’s The Forty First Wink: The Fathom Flies Again – the working title for Wink 2. It’s subject to change, but I think it has a ring to it. Hopefully onwards and upwards from there.

Initially, I had a very talented artist friend develop the cover for Wink, before the good folks at Ragnarok Publications put the finishing sheen to it. There are some very gifted artsy types out there, and with the proper prompting, they can come up with something that matches what you had in your mind’s eye perfectly.

I find it difficult to settle into reading a book whilst I’m writing. That said, I will always pick up something that looks just a little bit unusual, and give it a go. Anything that is original, intriguing, and preferably at least a tiny bit amusing. There is always room for spooky, too. I think humour and horror are a potent mix, so anything that marries the two automatically gets my attention.

Thanks for taking the time to answer our questions. Best of luck in the future, James.

Thanks for having me!