Posted Jun 29 2015 by TheButler in Interviews with 0 Comments 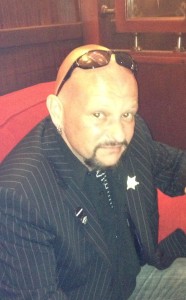 I spent my childhood in the middle of countryside and silence, so I read. A lot. Due to a series of most unfortunate events, both commercial and personal, a book I wrote about 15 years ago never saw the light of day so I turned my back on writing and went to live somewhere hot with no internet but plenty of bars and it wasn’t until years later, when I was experimenting with writing again on Twitter, that a meeting with Jeff Noon made me realise these short bursts could make up a whole universe of fiction and so the VirulentBlurb projects began.

To explain a bit about the VirulentBlurb universe, the original tweets and story in VirulentBlurb:Fractures introduced us to The City…a place of perpetual night and constantly falling dust. Fifty years ago there was some kind of conflict that broke the sky and robbed this world of its sun. All that remains is this City and a few hundred square miles of wasteland which are bordered by walls of flame…anyone who has tried to pass these walls has never returned. The City is, for all intents and purposes, under the cruel hand of an organisation known as NewDawn Tec and their imposing headquarters; The PYRAMID. This is a world of technological wonders, crime, gene splices and plot strands that loop and unravel back upon themselves.

But there is more, it’s vast and expanding quickly. There is The Universe next door, The Veil, originally thought to be a Virtual Reality created by NewDawn Tec, but which turned out to in fact be another dimension. Then there is The EverLands, a place of fairytale and myth, which is the very core of my universe, everything that happens here is reflected throughout the Five Great Planes of existence. My Universe is one of reflections and echoes and wheels within wheels. Whatever happened fifty years ago in the City has rippled and spread, infecting every reality in every plane.

The Universe is broken…it’s up to my characters to find a way to fix it.

I am always writing. My mind doesn’t stop coming up with ideas all fighting for attention, some of which become major parts of my universe, some don’t make it at all, but it never stops…EVER! As far as the physical act of transferring the ideas to the page goes I love my kitchen. Standing in my kitchen, window open, working using the phone or two finger typing on the laptop that seems to go on forever, but it’s tranquil and works for me.

Is there anything you must have to write? For example, silence, whiskey, and a close shave.

Music. Beer. Smokes. Phone. And more beer. Each of my characters draws different musical artists to me, so the CDs playing are dependent on whether I’m writing Lobo and his gritty life or Amelia and the more fantastical fairy tale elements. Beer and smokes are a godsend. They help take the edge of my actual reality and let me delve deeper into my work…that’s my excuse, and I’m sticking to it.

Science Fiction and Fantasy mostly. I grew up on Moorcock’s Elric and devour anything by Jeff Noon. The Illuminatus Trilogy with its random juxtaposition of time and meaning was highly influential, and I adore the brevity of P K Dick. But music lyrics play a big part – In fact, to be truthful, the Blurb is far more musical than it is literary. Without Jeff Noon I wouldn’t be writing at all, he showed the world that it’s okay to tell a story in a sometimes unconventional way, but in my head my entire universe is a grand musical spectacular, so song lyrics and melodies play a huge part in creating rhythm for both my work and non-work life…

Do I have a non-work life?

Twitter.  The constraint of characters strips the flab out of the writing and distils everything to its essence.

Mostly just to get the universe out there. To let people meet the characters that live in my head. And to make a living – buy the books, kids!

Now, I’ve started writing more off Twitter so the flow is better, although I don’t know if that’s necessarily an improvement as I still enjoy the punk staccato of tweets and I need the immediate feedback from readers so Twitter will always be part of my writing. I guess whilst I’m comfortable in my style and it suits my universe sometimes taking a step away and doing things differently can help. For me different is more conventional.

As little as possible haha. With my work there’s a lot of spullchicking …er… spellchecking but the content always remains as I wrote it so there’s no editing that way. It goes out as it came into my head. Otherwise, the universe doesn’t work. I’m really lucky to be surrounded by people who know me and buy into what I’m doing so I really don’t have to go back and forth with notes.

Thank you. And you haven’t seen anything yet.  Oh, and please write a review so that everyone else knows it’s good too. Oh, and buy my books for your friends as well so they know how good I am.

Printable?! Haha It’s their loss! No honestly I’m just kidding. The beautiful thing about all forms of art is that it speaks to some and not to others. No one reads the same book the same way. But all the books are different. So, just because you don’t like one…

Just one piece? If you want to write it, just write it. It doesn’t matter if it doesn’t “fit into boxes.” There are no rules.

More of the same – hopefully! There’re a lot of books in the planning and others already underway as the universe just keeps expanding. I have a series of novellas on the go, there are more Amelia and Lobo in the works, the universe is seemingly endless, so my words go where my mind takes them.

I’m so very lucky. I don’t need to have much input into my covers as Susan (Omand) truly gets what I’m saying in the narrative and views it in picture form. She takes what she takes from it, paints something, I say yes and the lettering gets added. Everyone needs a Susan.

I don’t read as much new fiction as I would like. For me, storytelling is all about the mood so if I’m going to sit with a novel it’ll be one I’m familiar with. What really does excite me though is that through this often double-edged sword we call technology I have discovered some fantastic people trying to be different, to break down the boundaries and collapse the boxes everyone likes to label everything with. From Jeff Noon you spawned a whole host of writers, artists and musicians who constantly please and entertain me with where their projects go and I have such admiration for their bravery.

For more on Kneel’s work check out his book listing page: