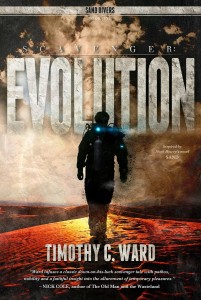 In the future, sand divers search the depths for the lost city of Danvar and the truth behind their bleak existence. Divemaster Rush hasn’t dove since he lost his infant. A job offer turns from an escape to a trap and the lure of a hardened heart to survive like anyone else would. One dive leads to another. Farther and farther from the surface, death and evolution change his world. He’ll have to change too or watch his wife rise without him.

Inspired by Hugh Howey’s world of Sand. Written and sold with his permission. Scavenger: Evolution takes the landscape of Dune and throws in the pacing and thrills of Alien.

“Decisions have real consequences. People die. Good people do bad things, but even the fallen can find some kind of hazardous redemption… This book is honest — honest about human nature, which makes it dark — and optimistic, which makes it in the end oddly feel good.” – Martin Page, Black Gate Magazine

“Ward infuses a classic down-on-his-luck scavenger tale with pathos, nobility and a faithful insight into the allurement of temporary pleasures. In short, pick this one up, it’s a strong read that stands on it’s own two feet.” – Nick Cole, author of The Wasteland Saga and Soda Pop Soldier