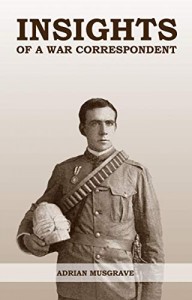 Following service in the British Army, brought to a premature end by injury and subsequent medical discharge, George Clarke Musgrave became a war correspondent and journalist, seeing action with British and American forces in West Africa, Cuba, South Africa, China and France. In a career that spanned some twenty-five years, he grew from a raw but determined neophyte of the media circus to a seasoned, brilliantly analytical and highly respected observer of war. But in the same twenty-five years, he also became a more frustrated, more discouraged and, ultimately, more troubled man.

While he had no hesitation in identifying and exposing the failings of those in authority, our author was never able to fully come to terms with the habitual inability of our politicians and our best generals to make clear, correct and courageous decisions; or with the ignorance and incompetence of officials at every level; or the foul stain of corruption that sucks the very lifeblood from the fighting man. And he lived with this through the five theatres of conflict in which he served. He suffered the brutality, the traumas and the evils of war tempered with an undying admiration for the men and women who lived and loved, suffered and triumphed in its fighting.

He was a committed and prolific writer whose work chronicles the often untold stories of those left behind to suffer the iniquities and atrocities of wars that others fought. He wrote a number of books which were readily published and well received by audiences on both sides of the Atlantic, as well as a wide-ranging portfolio of media articles and reports. To meet the commercial requirements of his publishers and editors, though, his books, newspaper articles and press reports were necessarily circumspect in terms of the deep-rooted issues and problems with which he struggled. So, it is to his private and often unpublished essays, diary notes and letters that we must turn if we are to discover his fears and concerns, his judgments and opinions, his hopes, his beliefs and his insights; the insights of our war correspondent.